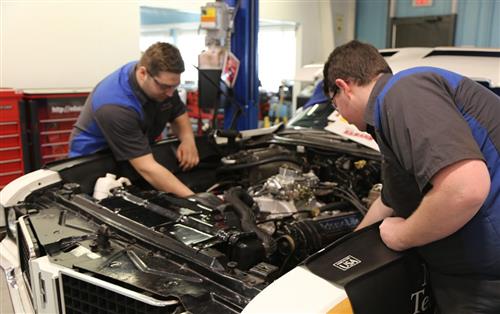 Riverhead High School seniors and longtime friends Nicholas Camarata and Adam McAllister have been fixing cars since they were kids.

Next week, the 17-year-olds will test their automotive knowledge in a statewide competition.

There, students progressed through 10 workstations every 15 minutes to test their skills in automotive systems, including heating, air conditioning, engine repair, electrical, transmissions, alignment and brakes. Competitors were required to diagnose, fix or research the proper service information at each station.

“There was one on alignment, one on an electrical board, brakes, service information, there was a bunch of them,” Adam said. “It was basically to display your knowledge of repairs — the next competition will be more physical, actually repairing the car.”

But it was no sweat for the duo, who have been friends since they were about 5. Adam said they had time to spare after each workstation, so they were able to double-check their work.

“We were pretty well prepared going into it,” he said. “Most of the stuff we knew, since we practiced a lot beforehand.”

Nicholas and Adam, whose win netted them $25,000 in shared scholarship funding to select technical colleges, have been preparing for the competition inside and outside the classroom. Roughly three days a week, after practicing at school, they’d visit local dealerships like Riverhead Toyota or Riverhead Buick GMC to use their line machine and tech equipment.

“Most of that newer stuff was going to be on the competition, so we needed to get used to using that stuff,” Adam said.

Both students, who are in their second year of BOCES classes, were guided by auto tech teacher Mike O’Hara.

At the upcoming state tournament Feb. 11, also in Whitestone, Nicholas and Adam will have two-and-a-half hours to repair a 2020 BMW 3 series with several mechanical issues. If they take first place again there, they’ll advance to the national competition at the Jacob K. Javits Convention Center in Manhattan during the International Auto Show this April.

To prepare for the state competition, they spent two days at the BMW of North America headquarters and training facility in Woodcliff Lake, N.J., meeting with manufacturer instructors and learning about that model.

Mr. O’Hara said he knows Nicholas and Adam have the skills to win the state competition, but it’s more challenging than regionals, because competitors are asked to write down all mechanical changes they make to each vehicle.

Kate Nalepinski is a general assignment reporter primarily covering education on the North Fork. She’s a 2018 graduate of Ithaca College and has volunteered with the Robert W. Greene Summer Institute for High School Journalists at Stony Brook University.