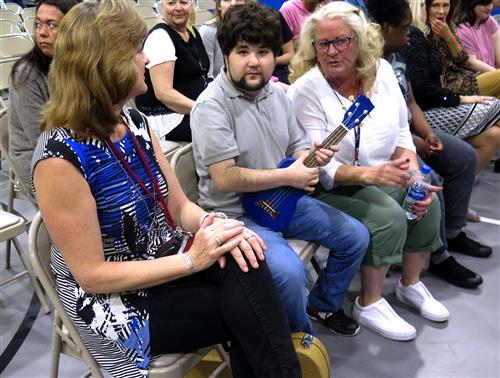 For most students, when Strummin’ and Drummin’ comes to town, it’s a free concert during the day. However, for Acie, a student at Westhampton Beach Learning Center (WHBLC), they’re a backup band. Strummin’ and Drummin’ is a three-piece band that tours the country providing educational entertainment or “edutainment” to young children and students. Westhampton Beach Learning Center is an Eastern Suffolk BOCES school that provides special education services to students with special needs.

During a concert at WHBLC, the band interrupted their rendition of the song This Land is Your Land to welcome Acie on stage. He joined the band carrying his ukulele and, after taking time for a brief solo, finished the song with their strong accompaniment.

While this might seem like a special occasion, it’s just a day in the life for the student who is called “the mayor” of WHBLC. Acie is known for being incredibly social, and will always take the time to say hello to anyone he passes in the hall. He also loves to be on stage and has stolen the show many times during school concert.

Acie’s teacher, Laura Kraker, says that he has a trueborn talent for music. “Acie, as you can see, absolutely has music in his soul,” she said. “He loves to sing and dance and will steal any show. He has a natural ability to pick up on the rhythm in songs and he learns the words quickly. He is also able to make up silly lyrics about others while listening to his favorite songs on YouTube.”

However, Acie wasn’t always so comfortable in front of a crowd. While he has always been social, the past seven years at WHBLC have helped him truly find his home on stage. He has worked with speech therapists to help him better articulate words when speaking or singing. He’s also gained the confidence he needs to come out of his shell and perform. “We’ve worked on strategies to help him when he gets nervous,” Laura said. “When he gets anxious, he needs extra encouragement to try something new.”

“Acie was always eager to learn music and always loved the ukulele when I played it in class,” Christa said. “So, one day we were playing it and I asked, ‘Do you want to take ukulele lessons?’ and he said, ‘Yeah! Ukulele lessons! That would be really cool!’”

Christa started giving Acie private ukulele lessons in her free time. Initially, Acie was learning by playing Christa’s ukulele. She said that he had great motor control, and she was able to trust him when it came to strumming the tiny strings and making notes on the delicate fretboard. Acie received his own ukulele as a gift for his birthday. The small instrument is a little over a foot long, bright blue, and lives in a shining gold case.

Once Acie received his own ukulele, he started to learn even faster. He has been thriving in lessons and has learned two songs: Coconut by Harry Nilsson and Chain of Fools by Aretha Franklin.

“The energy around him is great,” Christa said. “The minute you see him play and sing, you’re just going to smile because that’s the energy he gives off.”

Acie is currently a senior at WHBLC. One of the concerns that teachers have for him is continuing the thespian spirit that he has. They are working with a theater company for people with special needs to get him transportation to lessons and rehearsals so he can keep doing what he does best—brightening people’s day.

After he graduates, Acie will return to his home in Montauk, prepared with the skills he will need to bring joy to an entire community. “We often think of how wonderful it would be for him to be a greeter at a store to enhance others’ shopping experience,” Laura said. “Just imagine him being hired to visit nursing facilities to speak to and sing for senior citizens who are too often forgotten. Acie makes smiling contagious!”