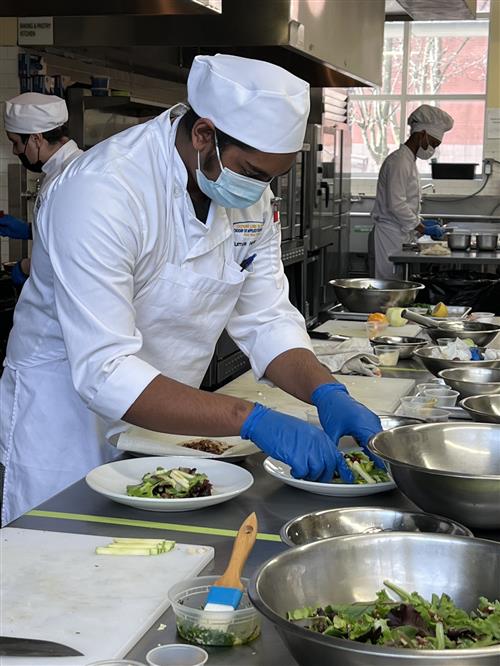 Academy Culinary Arts student Humza Hussain, under the coaching supervision of Chef Matt Kozak,  won second place and a $40,000 scholarship at the America’s Best High School Chef Competition this month. Humza, a Central Islip resident, is a second-year student in Chef Kozak’s class at the Academy’s Milliken Technical Center in Oakdale. The Eastern Long Island Academy of Applied Technology, referred to as the Academy, is the Career and Technical Education Program of Eastern Suffolk BOCES.

America’s Best High School Chef is a one-day culinary competition for high school seniors who desire to pursue the culinary arts at the college level. Student competitors are asked to demonstrate their skills in the Culinary Arts Center at Monroe College’s School of Hospitality Management and the Culinary Arts in New Rochelle, NY. Humza’s scholarship will be used towards his Bachelor’s Degree at Monroe. The competition consisted of three rounds, with only the finalists moving into the third round. The first round was knife skills, the second round, creating a cold salad, and the third round was preparing an entrée utilizing a market basket including a whole chicken. Competitors were judged on professionalism, sanitation, workstation, workflow, technique, plating, and presentation.

Humza says without this opportunity, attending college would not have been a possibility for him. “This was a life-changing moment for him,” said Chef Kozak. “Humza worked so hard preparing for this opportunity and he ended up making $40,000 in a day.” Humza said, “I came into the Culinary Arts Program hoping to learn a little bit to possibly start my own business, but I didn’t know that opportunities like this existed from attending this program.” Humza plans to get his Associate in the Culinary Arts and his Bachelor’s Degree in Hospitality or Entrepreneurship with the goal of eventually opening his own business.