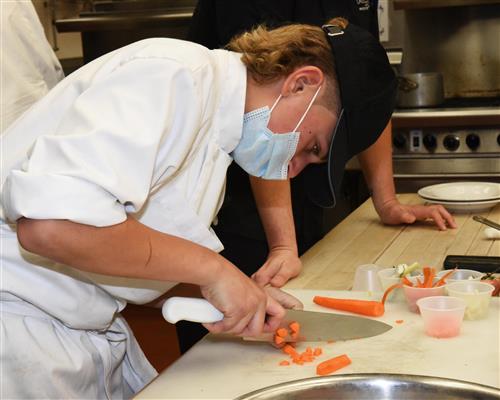 The competition took place on Monday, November 8, at the Edward J. Milliken Technical Center (MTC) in Oakdale, where each of the seven participating Academy students attend the Culinary Arts Program. Teams of culinary students from all three Long Island-based BOCES challenged each other for the opportunity to win scholarships to the Culinary Institute of New York at Monroe College. Five teams of three students each were paired with a professional chef advisor who provided verbal guidance. The American Culinary Federation will announce which teams placed first, second, and third at their gala in March. Scholarship winners will each receive $28,000, $20,000, and $16,000, for first, second, and third place, respectively.

All competitors were informed in advance of the protein they would be given (chicken) and they were also required to prepare a vegetable and a carbohydrate. The teams consulted with their advisors and then had one hour to cook their entrées.  Frank Costantino, assistant vice president for Academics and the dean for the School of Hospitality Management for the Culinary Institute of New York at Monroe College, presided over the event and chose the winners. Entrants were scored on a point value system in categories such as organization, sanitation, utilization of ingredients, creativity, flavor, and texture.