Audio Production students at Ward Technical Center in Riverhead are competing to create the best remix in an international contest hosted by the website Skio Music. The students used tracks provided by the website to remaster the song Senses by the band KINGDØMS.  Audio Production is a program provided by the Eastern Long Island Academy of Applied Technology and offered at the campuses in Oakdale and Riverhead.

Students downloaded all parts of the song, including vocals and different background instruments. While the included tracks provided a foundation to start from, students added their own music to enhance their pieces.  “This song is kind of slow and melodic, so I created a hip-hop beat for the base of my remix,” said Carlos Velazquez, a junior from Remsenburg-Speonk UFSD. “Now that I have the beat, I’m going to chop up the vocals they gave us to give the song a different feel.”

“Remixing requires mastery of all the skills that we teach,” said Bill Sperl, teacher of Public Service, Communications, and Media at Ward Technical Center in Riverhead. “The students are motivated to win, so each time we discuss a new tool, they’re immediately using it in their remixes to try and make a better track.” 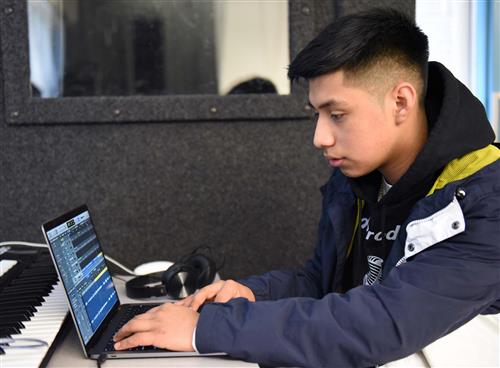 Carlos Velazquez, Remsenburg-Speonk UFSD, works on his remix in Logic Pro, an audio mixing software that is a standard in the industry.

During class, students listened to a remix produced by teacher Bill Sperl. Eric Guli, Shoreham Wading-River CSD, smiles as he hears how his teacher remastered a track to fit his interpretation of the song.