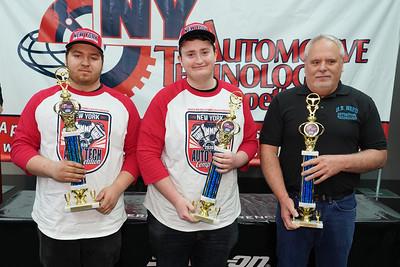 The competition is held each year at the association’s facility in Whitestone, NY. Other regional competitions are also held in New York City and in upstate New York. A total of 12 winning teams qualify for the state event. During the regional challenges, teams of students progress through 10 workstations every 15 minutes to test their skills in all areas of the automobile, such as heating, air conditioning, engine repair, electrical, transmissions, alignment, and brakes. Students are required to diagnose and fix, or quickly research the proper service information on a laptop.

Each winning team draws an envelope at the regional competition to determine the car they will tackle at the state event. The car won’t run and will have dozens of mechanical issues. The teams have two-and-one-half hours to fix and document everything. Nick and Adam drew a 2020 BMW three series. They were invited to spend two days at the BMW North American headquarters and training facility in Woodcliff Lake, New Jersey to meet with manufacturer instructors and learn about the car to prepare for the next round.

First-place regional winners received scholarship monies to select technical colleges. The upcoming state competition is also held at the Whitestone location and only the first place team from that tournament will advance to the national competition at the Jacob K. Javits Convention Center in Manhattan during the International Auto Show this April.

Mr. O’Hara turned out not one, but two teams that placed in this year’s regional competition. Another team of students from his class came in third. Over the years, he has trained approximately 12 regional first place teams, three winning state teams, and two national championship teams.

O’Hara credits his outstanding record to several factors – the high level of commitment from his students; the extensive time he spends outside of traditional school hours preparing his classes; and to the relationships with dealers he has developed, which allow him to either borrow vehicles or bring students to manufacturer facilities for training.

Said O’Hara, “My students are just as dedicated to this program and their own success as I am. They put in a great deal of hard work after hours to properly train for this event, and it shows.”

The Eastern Long Island Academy of Applied Technology, referred to as the Academy, is the Career and Technical Education Program of Eastern Suffolk BOCES and has locations in Bellport, Oakdale, and Riverhead. Ward Tech is located on the Riverhead campus.